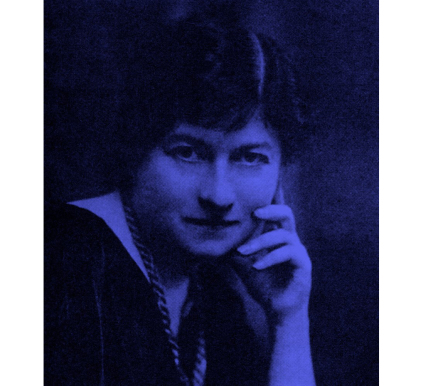 • Soror Virakam – Mary Desti, née Dempsey (1871-1931). Through her second marriage she became Mary d’Este Sturges. After her divorce she became Mary d’Este. Later she changed it to Mary Desti. Frater P. and Mary d’Este Sturges had a short affair during which in a dream Mary came in contact with Ab-ul-Diz, the head of five White Brethren, who wished to communicate with Fra. P. It was Ab-ul-Diz who gave Mary the name Virakam.

An old acquaintance of Aleister Crowley was in New York City at the time of Crowley’s arrival in 1914 E.V. Mary Desti, who under the name Mme. Desti made perfumes in Paris, was reported staying with friends in New York City in the beginning of April, 1915 E.V., and had lost all in Paris by the war. Mary Desti, or, Mary Vely Bey, had also been doing business as dealer in perfumes at 347 Fifth Avenue, but had filed a petition in bankruptcy on December 23, 1914 E.V. Desti also worked as a playwright and had several plays produced in New York. Whether Crowley met Desti, whom he based his main character on in The Butterfly Net (published as Moonchild), which he wrote in 1917 E.V., is not known to me, but perhaps he did. Around May, 1915 E.V., Desti went to France as a Red Cross Nurse for four months. Desti was born as Mary Dempsey on October 10, 1871, in Quebec, Montreal, Canada – later she called herself Mary d'Este. She died fifty-nine years old in Manhattan, New York City, on April 12, 1931 E.V., of superabundance of white corpuscles in the blood, a diseace that she contracted after the tragic death of her friend Isadora Duncan.

Mary Desti is remembered by Thelemites as Soror Virakam, the one who in November, 1911 E.V., brought Crowley in contact with Ab-ul-Diz, the "head of the 5 White Brothers", first "seen" by her in a dream, and the next day she communicated with him in a trance in a hotel room in Zürich, a contact which gave birth to the inestimable "Ab-ul-diz Working" and to "Book 4", whose first part Frater Perdurabo and Soror Virakam wrote together in Posillipo near Naples in Italy after the Ab-ul-Diz Working in the Palace Hotel, St. Moritz (Figure 35) – and later they also wrote Book 4, Part Two together. And she is remembered by others, among other things, as Mme. Desti of Rue de la Paix in Paris, the inventor of profound perfumes, weird cigarettes and cigarette cases, and for introducing mauve powder and the vogue for green and blue hair! Later in the 1920s she opened a studio on Fifth Avenue in New York City where she purveyed costly hand-painted shawls, perfumes and dresses. At that time she was married to her fourth husband, an English-born ex-Army officer Captain Howard L. Perch (1890-1957), a bachelor to whom she had been married to in London in November, 1920 E.V., after divorcing (?) her third husband, Vely Bey, the son of Ilias Pasha, court physician of Sultan Abdul Hamid, the last sultan of Turkey, who reigned from 1876 to 1909 E.V. Several writers state that Desti's marriage with Vely Bey took place in 1911 E.V. and others that it was in 1912 E.V., however, it was in 1912 E.V., exactly as stated later by Crowley. According to the register of marriages in England & Wales the marriage between the two took place in Marylebone, London, on February 12, 1912 E.V. Vely Bey, a former guard to the deposed sultan of Turkey and former Turkey Consul to Mexico, had in 1906 E.V. founded Vizier Cigarette Co. in Chicago, IL. The company was not a success and soon folded. It was through Vely Bey who boasted a skin lotion supposed to contain beauty secret properties that Desti became interested in cosmetics and beauty treatments and opened a beauty salon in Paris. Vely Bey was as a Turkish subject at Kingston, Jamaica, interned by the British in 1918 E.V. He and his father, Ilias Pasha, appeared in Moonchild, respectively as "Abdul Bey" and "Akbar Pasha". Crowley wrote in Confessions about how his relationship with Virakam ended:

The programme was cut short. The secret contest between the will of Virakam and my own broke into open hostility. A serious quarrel led to her dashing off to Paris. She repented almost before she arrived and telegraphed me to join her, which I did, and we went together to London. There, however, an intrigue resulted in her hastily marrying a Turkish adventurer who proceeded to beat her and, a little later, to desert her. Her hysteria became chronic and uncontrollable; she took to furious bouts of drinking which culminated in delirium tremens.

The partial failure of our partnership was to some extent, without doubt, my own fault. I was not whole-hearted and I refused to live by faith rather than by sight. I cannot reproach myself for this; for that, I have no excuse. I may nevertheless express a doubt as to whether full success was in any case possible. Her own masterless passions could hardly have allowed her to pass unscathed through the ordeals which are always imposed upon those who undertake tasks of this importance.

Desti's son of her second marriage the American playwright, screenwriter and film director Preston Sturges, born Edmund Preston Biden, (1898-1959), was thirteen years of age when his mother and Aleister Crowley met, and he did not like his mother's new lover and Crowley mentioned him in Confessions as: “Virakam's brat – a most god-forsaken lout.” Later when Preston Sturges wrote his autobiography he probably thought he wrote a screenplay and was exempted from wasting his precious time on tireless research and therefore he wrote the following pretentious balderdash:

My mother, under the appellation of Soror Virakam and under the delusion that she was temporarily a Babylonian uhu or call girl, took down in spiritualistic shorthand an entire manual of black magic known as Book Four. This work was dictated to her from the dark blue yonder by a Babylonian pimp working under the name of Abduliz [sic, Abuldiz].

Desti was an intimate friend of the American dancer who revolutionized the art of modern dance, Isadora Duncan, born Angela Duncan (1877/1878-1927), and in February, 1929 E.V., one and a half years after her death Desti published the biography The Untold Story: The Life of Isadora Duncan, 1921-1927. Isadora Duncan had died on September 14, 1929 E.V., in Nice, France. She was strangled when an enormous silk scarf she was wearing, a gift from Desti, got tangled in the rear hubcaps of her open car.

(The above text is an extract from For the Thelemites, “Chapter 14 – America”, pp. 684-6, but here printed without notes indicating sources etc. The text with notes and illustrations can be found in the PDF file below! For Virakam and the Ab-ul-Diz Working, see also the extracts "Perdurabo" and "Magick".)

[…] Generally accepted as one of the most depraved, vicious and revolting humbugs that ever escaped from a nightmare or a lunatic asylum, the practitioner and staunch defender of every form of vice historically known to man, universally despised and enthusiastically expelled from every country he tried to live in, Mr. Crowley was nevertheless considered by my mother to be not only the epitome of charm and good manners, but also the possessor of one of the very few brains she had been privileged to observe during her entire lifetime, that she could almost bring herself to admire. Ask me not why!

Aleister Crowley wrote in Confessions about his first meeting with Mary Desti, at that time Mary d’Este Sturges, in the Savoy in London on October 11, 1911 E.V.:

“This lady [Mary d’Este Sturges], a magnificent specimen of mingled Irish and Italian blood, possessed a most powerful personality and a terrific magnetism which instantly attracted my own. I forgot everything. I sat on the floor like a Chinese god, exchanging electricity with her.”

– Read online or download the PDF file (10 pp.) below containing an extract from FOR THE THELEMITES. [May need further proof reading] 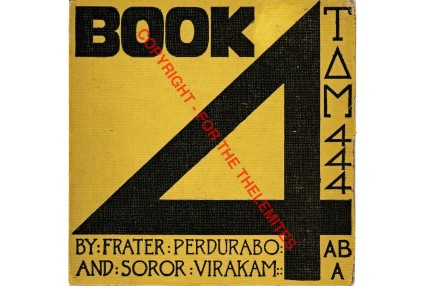 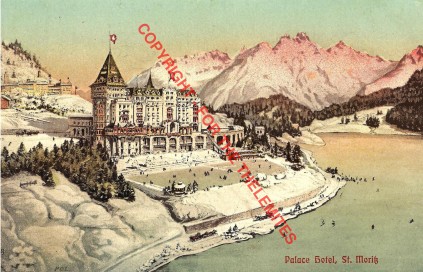 • Artistic postcard, c. 1911 E.V., showing the Palace Hotel, St. Moritz-Dorf (Village of St. Moritz) in Switzerland by winter. It was in this huge Gothic pile that the Ab-ul-Diz Working took place in November and December 1911 E.V. Within the palatial exterior, Gothic arches and hand-carved wood abounded, and to this Gothic palace arrived Frater Perdurabo and Mary d’Este Sturges – Mary Desti, née Dempsey (1871-1931) – on Wednesday, November 22, 1911 E.V., and took a suite. This suite became the temple of the Working called ‘The Ab-ul-Diz Working’, wherein the “head of the 5 White Brothers”, Ab-ul-Diz, communicated with the Seer Virakam (Mary d’Este Sturges) and Fra. P. about “The Book IV. Your instructions to the Brothers”, a book that Fra. P. had to find (write) and return to the Brothers. St. Moritz, which in Romanic dialect is San Murezzan, is situated in the Eastern Alps in the Engadine valley on a mountain-terrace above St. Moritzer See (St. Moritz Lake), and is the highest village (1830 metres) in the Engadine. The village, a famous health and winter resort, had in 1911 E.V. 1600 inhabitants. The luxury hotel – today known as Badrutt’s Palace hotel – opened in 1896. Note that the artist has removed the large Grand Hotel built in 1864 and located next to Palace Hotel (on the right)! 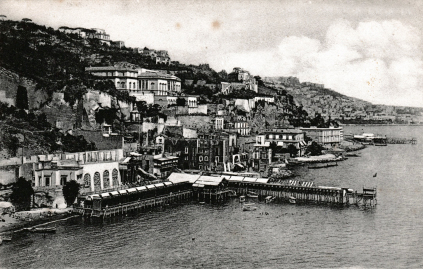 • 1910s panorama of Posillipo, Naples. Crowley was, in fact, shortly back in Posillipo in the end of September 1920 E.V. 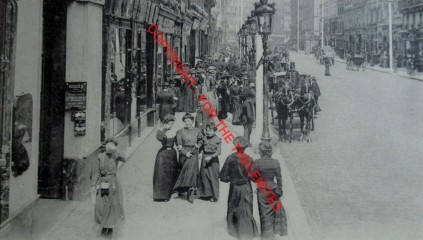 • 1900s street scene from outside 4 Rue de la Paix in Paris – the address where Madame Desti had her business.

• Photograph from January 1920 E.V. from Desti's Club in London, which was first organized by her in 1919 E.V. In November the same year Desti married Captain Howard L. Perch, an English-born ex-Army officer. It was her fourth marriage. After WW1 she had divorced (?) Vely Bey, the son of Ilias Pasha, court physician of Sultan Abdul Hamid, the last sultan of Turkey, whom she had married in London shortly after the Ab-ul-Diz Working, in February 1912 E.V. The above photograph appeared in the British illustrated weekly journal The Sketch, January 28, 1920 E.V. 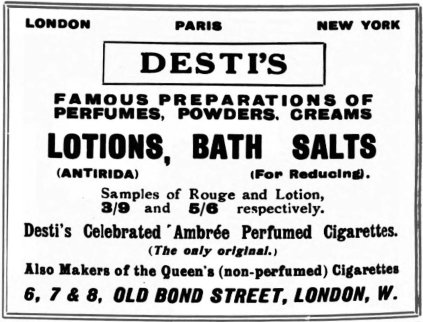 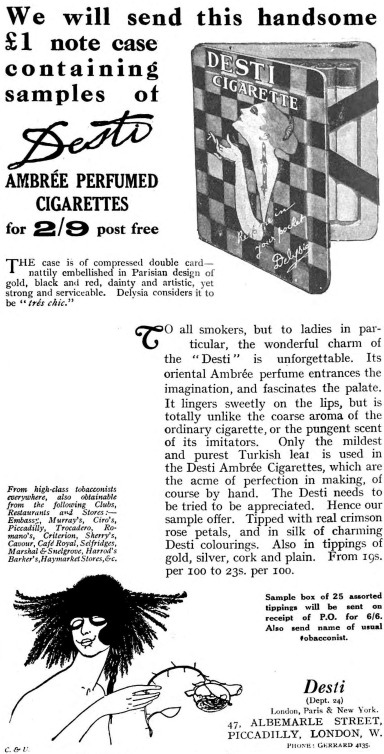