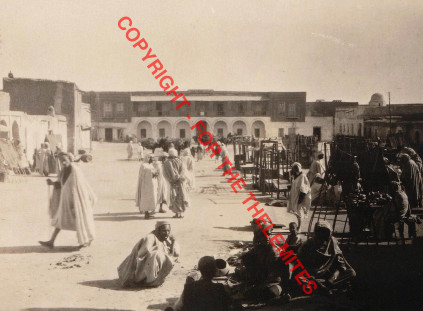 • Photograph from Nefta in Tunisia dating from 1923 E.V. In the background Hotel du Djerid where Aleister Crowley, Leah Hirsig, and Morman Mudd stayed. 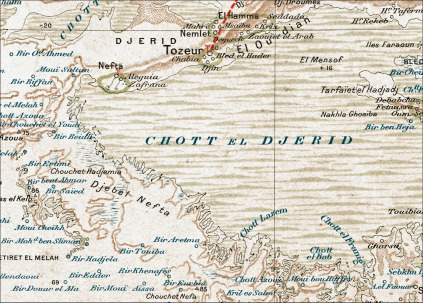 Late in October 1923 E.V. Aleister Crowley together with Leah Hirsig went to Nefta, a town and oasis on the edge of the Tunisian Sahara Desert some four hundred kilometres south-west of Tunis near the border of Algeria. In fact, Biskra in Algeria, where the Vision and the Voice had been completed in 1909 E.V., was only some 225 kilometres (as the crow flies) to the north-west of the town. Nefta – once known as the ‘port of Sahara’ – is one of the four oases situated in the district of Belad el Djerid, meaning ‘Land of the Palms’, or as it is popularly called el Djerid.

The Djerid is a rocky stretch of land bounded on the north by the Chott el Gharsa – a smaller salt plain – and in the south by the Chott el Djerid – the largest salt lake in Tunisia where a tradition holds that the Greek goddess of wisdom, Athena was born. The Greek traveller and geographer Pausanias (ii A.D.) in his Description of Greece says that the Libyans had a saying that the goddess Athena was the daughter of Poseidon and lake Tritonis (now called Chott el Djerid), and for this reason had blue eyes like Poseidon. It is also said that there was an oracle of Mopsus the Argonaut at lake Tritonis, and also a temple of Aphrodite on an island in the lake. The Djerid is shut in by mountains and sand hills and is the largest date-palm region in North Africa.

Crowley and Leah together with Norman Mudd stayed at Hotel du Djerid – at that time Nefta’s only hotel. The hotel, owned by a Frenchman named Louis Grech, was a former Arabic mansion, a two-story building in Tozeur-style, with portico and a flat roof. Here Crowley wrote the commentary to Liber CCXX which he named “The Commentary called D” – also referred to as “The Djeridensis Comment” – after Djerid where it was written, the Latin adjective “Djeridensis” means ‘from Djerid (in Tunisia)’. The commentary, which did not meet his expectations has longer commentaries on Chapter I and Chapter II. However, as only commentary on Chapter III he wrote, not in a state of giving up, but rather in a state of serenity:

The first two chapters of the Book describe Ideas without limit; the third concerns a fixed Event due to one union of them, namely the coming of HERU-RA-HA.

The contents of the chapter are instructions to those who are to govern His Aeon in His Name: and these rulers will appeal to me The Beast 666 for a comment upon the text when need is. Aum Ha.

As to the desert, palms, and Nefta, remember that Frater Perdurabo and Soror Virakam in 1911 E.V. in the Ab-ul-Diz Working were instructed to go to the desert and look for an egg under a palm tree – the same later mentioned by the Camel (Roddie Minor) who started to have visions which initiated the Amalantrah Working in 1918 E.V. – a Working where the name “Nefta” also appears. 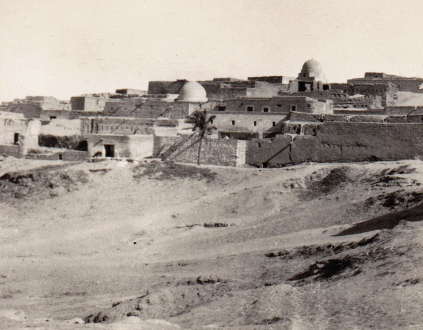