The ‘master-key’ to the Law of ΘΕΛΗΜΑ is you! And bear in mind that the Core and Key of the first Law ever given to man which is a true Law for all men in every place and time of course not are based on the old Aeons but something new that is forever valid!

The full title of Liber L vel Legis as it appears on the MS.’s title page was clearly planned to have appeared together with the facsimile of the MS. in “The Temple of Solomon the King” in the seventh number of The Equinox, March 1912 E.V., but here Crowley due to the missing title page – which J. F. C. Fuller had lent for his planned account of the Cairo Working in “The Temple of Solomon the King”, and which he not had returned after he broke with Crowley and the A.·.A.·. but just had added to his collection of Crowleyana – wrote:

The full title of the book is

As delivered by LXXVIII to DCLXVI

This was the title chosen by him when the book in 1909 E.V. had been privately printed for the use in the A.·.A.·.

I will go as far as to say that the missing title page influenced Crowley’s acceptance of Frater Achad’s “AL”, which replaced the original “L” – Charles Stansfeld Jones who later lost interest in the Aeon of Hoor and the Law of Thelema, and became a member of the Roman Catholic Church, baptized and confirmed in the end of the 1920s. Did such a weak, confused, and wretched “one” discover “the key of it all” together with the meaning of the “L”, the sacred title word of The Book of the Law? – of course not! Later he would also state that Aiwaz was the enemy of mankind!

Frater Achad could not explain in detail the exact meaning of “the numbers & the words” in Liber Legis’s Second Chapter, Verse 76, nor explain the ‘key page’ of the Third Chapter’s page 16 (Verse 47). It seems that he out of the many letters and numbers in the string of Liber L vel Legis, II, 76, spotted the two letters “A L” and concluded that they could be written in Hebrew forwards and backwards as אל, el, god, and לא, lo, no; not, and that they were the keys to the book, and after that “THE FOOL PARZIVAL” simply ignored that each of the other some twenty-six letters and numbers of the string of course must have a detailed meaning – a meaning hiding a complicated, magickal message of supreme importance!

And why should a book having at its ‘core’ the following statement by Hadit: “I am alone, there is no God where I am.”, be called “Liber AL” (אל, el), ‘the Book of God’! No, these words have for centuries belonged to another book, namely the Christian Bible, which sometimes has been called liber Dei, ‘the Book of God’!

As I will return to in detail in For the Thelemites, the title of The Book of the Law is exactly as Frater P. wrote it on its title page, namely “Liber L. Vel Legis.”! However, אל/לא may be useful keys in rituals etc., and three times 31 is still 93, but they are not words related to the title “Liber L” nor to the “glad word” of Chapter II’s Verse 76!

“The word AL exists in the Book of the Law, you did not “produce” it and I did not receive it from you. It was pointed out to me by you which is a totally different matter. The writer asserts that I have proclaimed AL to be the Key of the Work but this is not the case. So far as I attach any meaning to the phrase “the Key of the Work” the word would be Abrahadabra, a word which I “produced” myself by a train Qabalistic reasoning in Mexico City in 1900 e.v. That I produced the Word and Aiwass “accepted” it gives me no claim to be superior to Aiwass. On the contrary, I am profoundly honoured that he deigned to confirm my research by adopting it in the Book of the Law.” [In fact, Crowley's ‘production’ of Abrahadabra was prophetic!]

Love is the law, love under will.

It is to be expected that the Key to Liber L vel Legis must be something new, something unheard-of, a unique element with supreme magickal significance and power! As explained in the book preview of For the Thelemites so is the doctrine of the two Hebrew words אל, el, god, and לא, lo, not; no, old knowledge!

לא, lo, not; no, is the old problem for Gods and Men that Will under certain conditions turns into weakness, that “Will stops and cries Why, invoking Because”, that “Will stops & does nought.”! (Liber L vel Legis, II,30.) This problem has always been present in the Universe and the Gods have dealt with it by adding distance to its cause!

It is important to have read the "Book Preview" before visiting this page and its PDF file! – Read online or download this PDF file (2 p.)

An essay by Perdurabo ST on the meaning of Liber L vel Legis, II,76, and the Magick of the “glad word” hidden there, will appear on this page later! 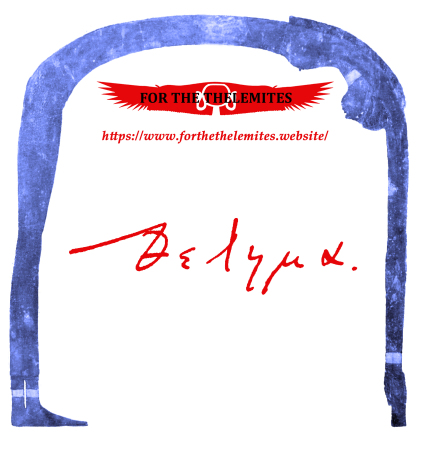