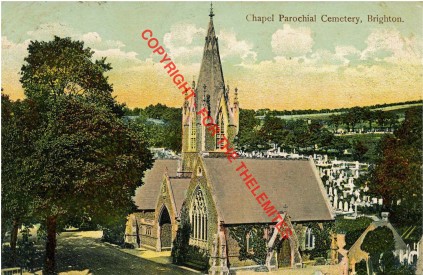 • 1900s postcard showing the Chapel Parochial Cemetery in Brighton, England, (now Woodvale Cemetery, Lewes Road) where Aleister Crowley’s funeral and cremation took place on December 5, 1947 E.V. The crematorium, which was added to the chapels in 1930 E.V. was located behind the Nonconformist chapel (in the front on the picture). 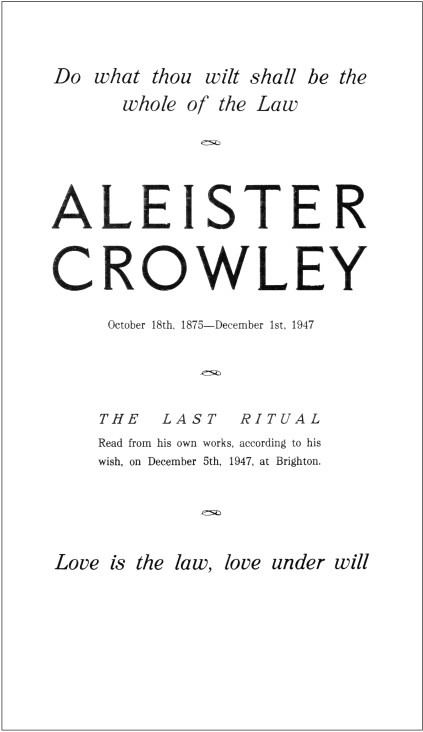 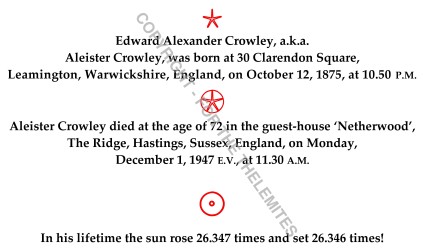 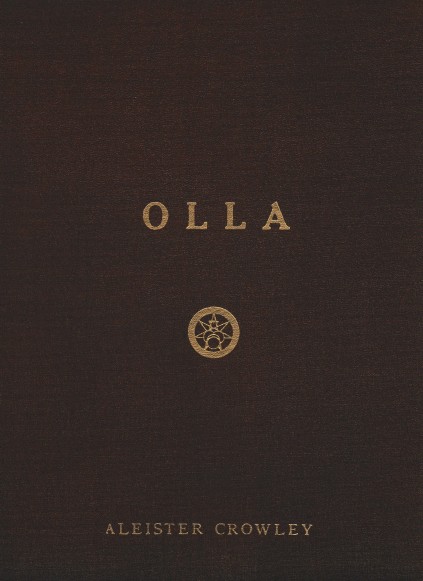 • Extract from For the Thelemites about Aleister Crowley's funeral on December 5th, 1947 E.V., in Brighton.

Read also about Frieda Harris and her art, together with Crowley's long-time close friend Louis Wilkinson; and finally discover the forgotten history of Ambergris! – Read online or download this PDF file (37 pp.) containing an extract from the book FOR THE THELEMITES. [May need further proof reading]

(In connection with this extract, see also the extract "Confessions, 1929 E.V."!)

• Above, right: Frieda Harris (Lady Harris), née Marguerite Frieda Bloxam, the artist of the magnificent, beautiful Thoth tarot deck, was born in Saint George Hanover Square, London, on August 13, 1877, and she died at the age of eighty-five on Gay Fawkes Day, November 5, 1962 E.V. (and not on May 11 as mostly stated!), in Srinagar, Kashmir, India, and was buried at the European cemetery in Srinagar. 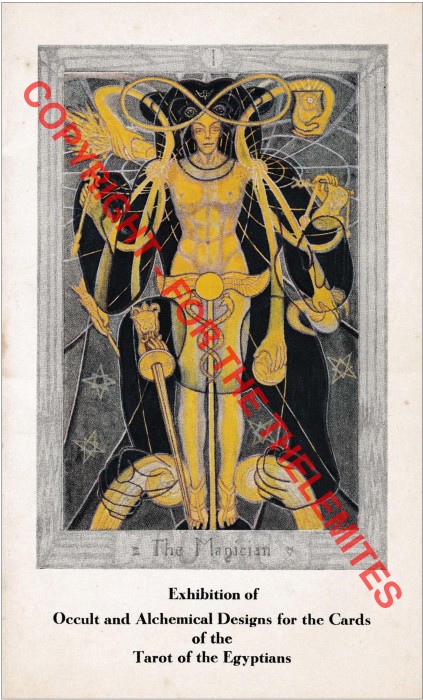 • Front wrapper of: [Aleister Crowley; Frieda Harris]. Exhibition of Playing Cards The Tarot (Book of Thoth) 78 Paintings According to the Initiated Tradition and Modern Scientific Thought with Other Occult and Alchemical Designs. (NP [London?]: ND [1941 E.V.]) 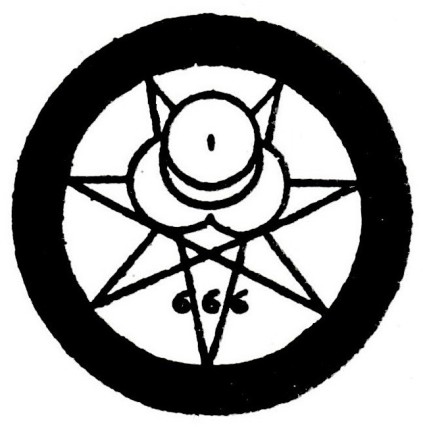 • TO MEGA THERION's ‘The Mark of the Beast’.

Hastings & St. Leonards Observer wrote in January 1947 E.V. about OLLA – one of the very few reviews of the book:

"Olla," an anthology of sixty years of song, is a handsome volume (published in a limited edition and with a portrait frontispiece by Augustus John) of poems by the well-known writer, Aleister Crowley, who for the past few years has made his home at Netherwood, The Ridge, Hastings.

The poems cover the period from 1887-1946, and include the opening lines of what the author believes to be his first published effort in verse. Written on many themes and in all parts of the world from Moscow to Granada, New York to Chipping Campden, these works reveal their creator’s ability – mentioned by him in his entertaining foreword – to put himself into the soul of various types of men and women and identifying himself “with their inmost creative Word.”

Mr. Crowley rejoices in the music, not to say the clangour, of words, which he uses sometimes with violence and always with power. He is at his most characteristic when (to borrow his own phrase) "scourging smug piety ... the stubborn stupor of the Government," but he is not always in a fighting mood. Of his more tranquil style, nothing in the book is a more beautiful example than the sonnet "Logos," written at Netherwood in 1946, and he infuses intense warmth and colour into his love poems though, as in the last line of the rapturous "La Gitana," he cannot always escape a lapse into bathos.

These poems have tremendous vitality, an Oriental richness of imagery, and many jewel-like passages of description which contrast strangely with the brutal and astringent touches which likewise abound Satire goes to an amusing extreme in "Panacea," the twelve lines of which consist entirely of the word "money," repeated forty-two times. Mr. Crowley will have his bitter little joke.

(Review of OLLA; An Anthology of Sixty Years of Song in the Hastings & St. Leonards Observer, Saturday, January 4, 1947.)

Another review was in a newly founded American quarterly magazine, Imprimatur: A Literary Quarterly for Bibliophiles, which in April 1947 E.V. stated about OLLA:

Recent books of poetry that have come my way include an extraordinary work by one of the most remarkable of contemporary writers, Aleister Crowley. Olla – Sixty Years of Song (The OTO, 121 Adelaide Road, London N.W. 3) is a large quarto selling at fifteen shillings. The buyer gets rather over sixty poems, and a portrait of the author by Augustus John – one of only 500 copies. Crowley's verse is eccentric, powerful, always arresting, and sometimes memorable. Perhaps Crowley will dine late, and the guests may be few: but they will get such a meal as was never ate elsewhere on sea or land.

(Review of OLLA – An Anthology of Sixty Years of Songs in Imprimatur: A Literary Quarterly for Bibliophiles, Vol. 1, No. 2-3, April-July, 1947.)

The review was apparently written by the quarterly's editor and publisher American railroad man and literary man Lloyd Emerson Siberell (1905-1968). As to the anthology's name “OLLA”, which in Latin means ‘pot’ or ‘jar’; ‘cinerary urn’, after the half-title was a quotation by the Latin poet Gaius Valerius Catullus (c. 84 - c. 54 B.C.E.), from Catulli Veronensis Liber (XCIV):

It's the old saying: the pot collects the greens.

OLLA had as frontispiece a drawing of Aleister Crowley by Crowley’s friend the Welsh painter and draughtsman Augustus John (1878-1961). John had written a letter to Crowley in the end of December 1946 E.V. where he had stated about him that he was “full of life and joy” and “an outcast in literary circles” – Crowley answered that he was delighted of this.

Crowley ‘portrayed’ Augustus John in The Diary of a Drug Fiend in 1922 E.V. where he appeared as the sculptor Owen:

Did I mention that my sculptor's name was Owen? Well it was, is, and will be while the name of Art endures.

Some five and a half months after Crowley's death Augustus John held his first show in eleven years, as stated by the Scottish paper The Scotsman on May 14, 1948 E.V., and the new drawing of Crowley was among the works exhibited:

IT is eleven years since Augustus John held a show, so it is natural that all London should be flocking to the Leicester Galleries to see the present one. Investors and art lovers alike are competing with one another for the works, most of which are new to the public. [...]

The drawings are, of course, superb. "Lady Killearn" is ethereal, "Aleister Crowley" wild-eyed and strange (but not as forbidding as a really wicked man ought to be), and the studies of "Dolores" filled with wonderment. For once Mr Churchill is not quite as we would have him. He looks too like a boat-race trainer for Oxford. Still, all these works were done by a master.

The exhibition at the Leicester Galleries had opened on May 5, 1948 E.V. Another newspaper, The Yorkshire Post and Leeds Mercury, also mentioned the new drawing of Aleister Crowley, May 5:

A FEATURE of Mr. Augustus John's exhibition which opened to-day at the Leicester Galleries is a pencil drawing of Mr. Churchill, done last year. Though technically it shows all the master's skill in draughtsmanship, this drawing cannot be said to have succeeded as a likeness. Other drawings are of Sir Thomas Beecham and Sir John Anderson; an almost frightening study of the late Aleister Crowley, of black magic fame;

As to Sir Winston Churchill, he was the leader of the Opposition at the time of the exhibition. The drawing of Aleister Crowley from the exhibition is today at the Harry Ransom Humanities Research Center, The University of Texas at Austin.

Augustus John wrote about the “OLLA” commission and Aleister Crowley in his autobiography:

[...] in course of time he developed into a very likeable old gentleman. He had sadly changed when he called on me recently to be drawn. I was scared by his appearance. He had shrunk unbelievable and his eyes were staring. But a book of poems he published shortly afterwards shows no sign of decrepitude. I was cheered by their vigour and verve and told him so. His poetry has been described as ‘Swinburne and water’. I dispute the justice of this too facile estimate: the mixture was much more potent. The fact is the Magus had a good deal more than the stock-in-trade of a charlatan, and perhaps only lacked good taste.

(The above texts are extracts from For the Thelemites, but here printed without notes indicating sources etc.)

Aleister Crowley’s death certificate gave the cause of death as: “1a Myocardial degeneration; II Chronic bronchitis; Chronic Heroin Addict”. The cause of death was certified by William Magowan, M.B., B.Ch., of Magowan & Paterson, Hastings – Crowley had in 1919 E.V. been prescribed the then legal heroin as an alleviant for his bronchitis which he had contracted back in 1905 E.V. during the assult on Kangchenjunga, the third highest mountain in the world.

Aleister Crowley died at the age of seventy-two (72 years, 1 month, and 19 days) on Monday, December 1, 1947 E.V., i.e. in An Ixxi, at 11.30 a.m. at Netherwood, The Ridge, Hastings, East Sussex, England. 15.960 days had passed since the Equinox of the Gods had taken place in March 1904 E.V. He had been born on Tuesday, October 12, 1875, at 10.50 p.m. at 30, Clarendon Square, Leamington, Warwickshire, England. His father was at that time forty-six and his mother twenty-seven. The boy Edward Alexander was in more than one sense born into a higher Christian life, and I notice that a weekly magazine published in London, The Banner of Holiness, and ‘The only Weekly Paper in the United Kingdom devoted exclusively to the Interest of Scriptural Holiness’, shortly after the boy's birth, December 2, 1875, had a small advertisement stating:

FREE. Imitators of God. This tract on the Higher Christian Life, will be sent without cost to any one applying to “H. C. L.” 30, Clarendon-square, Leamington.

“H.C.L.” is clearly an abbreviation for ‘Higher Christian Life’, and the person behind the advertisement Crowley’s father, Edward Crowley. The title, “Imitators of God”, apparently referred to The Epistle of Paul the Apostle to the Ephesians, Chapter V, verse 1-2, which in some translations state:

“Be ye therefore imitators of God as dear children; and walk in love, as Christ also hath loved us, and hath given Himself for us, an offering and a sacrifice to God, for a sweet smelling savour” (Ephes. V. 1,2).

As to Crowley’s age of seventy-two, the life expectance for a newborn infant in the UK in his year of birth, 1875, was 41.45 years, and in 1947 E.V. it was 66.31 years. Taking into consideration the way Crowley lived in his adult years, the age of seventy-two was more than impressive!

TO SELL BY AUCTION, […] Three Lots, […] No. 30, CLARENDON SQUARE. – This House also contains similar accommodation to the foregoing, but has no Stabling. It is now let on lease to E. CROWLEY, Esq.

In 1881 when Edward Alexander was five years old the Census for 30 Clarendon Square shows that apart from the three Crowleys the household consisted of a cook, a housemaid, a nurse, and a page. Aleister Crowley’s wealthy father, civil engineer, investor, Anglican Clergyman, and religious writer Edward Crowley was born on August 17, 1829, at Lavender-hill, Wandsworth Road, Surrey, England, as youngest son of Edward Crowley (1788-1856), and Mary Crowley, née Sparrow (1788-1868), and he died at the age of fifty-seven on March 5, 1887, at Glenburnie, Southampton, Hampshire, England. Edward Crowley married on November 19, 1874, Emily Bertha Bishop (1848-1917), youngest daughter of the late farmer John Bishop and Elizabeth Bishop, née Cole. Emily Bertha Bishop was born on January 17, 1848, in Hawley, Farnborough, Hampshire, England, and died, while Aleister Crowley was in America, at the age of sixty-nine on April 14, 1917 E.V., at Minley Holt, 8 Old Orchard-road, Eastbourne, Sussex, England.

(Extract from For the Thelemites, Chapter 10, pp. 655-7, but here printed without notes indicating sources etc.) 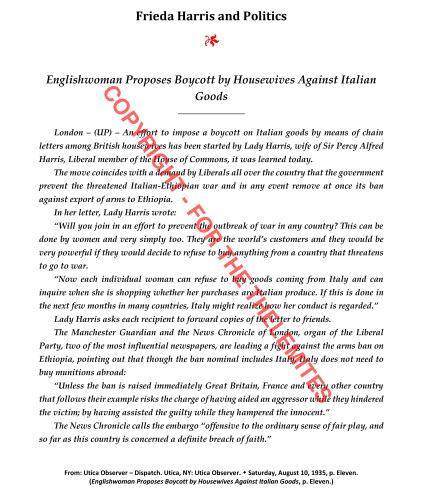