Above is seen the surprising appearance of the anonymous Amphora in a Burns & Oates Catalogue from 1911 E.V.!

The story normally told is that the Roman Catholic publishers Burns & Oates discovered that Aleister Crowley had written the volume and withdrew their 1908 E.V. edition after that only a small number of copies had been sold. However, nobody seems to know exactly what happened.

It turns out that Amphora, which has the year 1908 E.V. on its title page, in fact, was published in December 1908 E.V., (and not in 1909 E.V. as later stated) and the book, bound in gilt stamped blue cloth, was sent out for reviews the week before Christmas.

The London publisher had overlooked several things in the book, among other things, strong lesbian undertones! They apparently returned the unbound sheets to Crowley, perhaps sold them to him, and The Equinox and Wieland and Co. published in October 1911 E.V. these sheets – with a new title page that bore Crowley’s name – as Hail Mary.

Amphora, strangely enough, continued to be listed in Burns & Oates’ catalogues, where it appeared both in 1909 E.V.; 1910 E.V.; and 1911 E.V.! The great question is whether Burns & Oates continued to sell bound copies of the book? The fact that the book is extremely scarce speaks against it. However, their listing of Amphora first stopped after the publication of Hail Mary. But if Burns & Oates had continued to sell the book, which apparently was well received, why then had the unbound sheets which became Hail Mary not been bound?

Below is seen the title page of the privately printed, undated, anonymous edition of Amphora – “Privately Printed for the Authoress and Her Intimates”, which Aleister Crowley apparently had commissioned just after that Burns & Oates’ edition of the same work had been printed – both editions were printed by the same printer, and apparently printed from the same formes! The only difference between the two editions was that Crowley in his Privately Printed edition had included an epilogue where the initial letters of the first and last word in each line revealed an obscene statement! However, at that time Crowley only knew this secret. 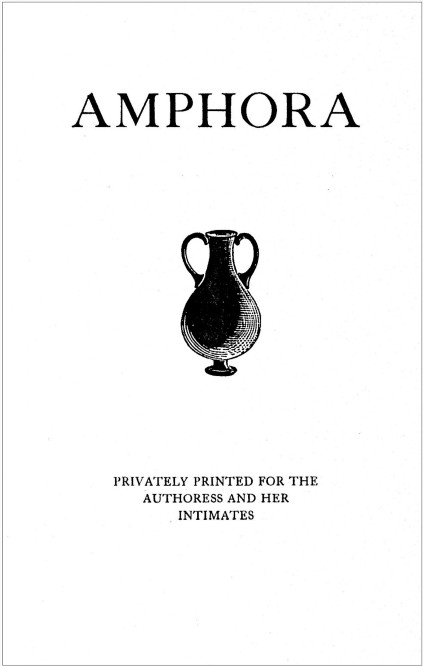 • Title page of the anonymous Amphora, "Privately Printed for the Authoress and Her Intimates".

Discover why Crowley perhaps published his Clouds without Water stating that it was "Edited from a Private M.S. by the Rev. C. Verey”, and that it was “Privately Printed for Circulation Among Ministers of Religion”! – Read online or download this PDF file (18 pp.) containing an illustrated extract from FOR THE THELEMITES. [May need further proof reading]

(In connection with this extract, see also the extracts "Ye Sword of Song" and "February 1913 E.V."!) 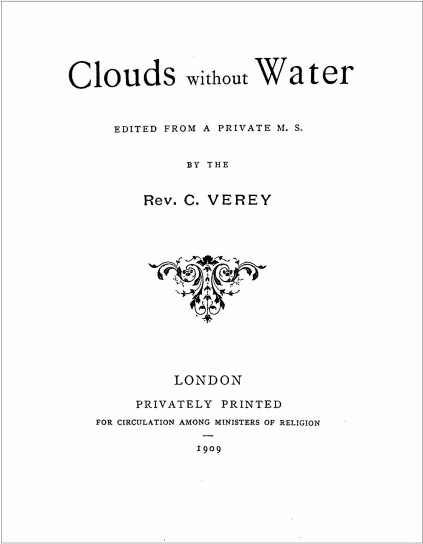 • Title page of Clouds without Water – “Edited from a Private M. S. by the Rev. C. Verey” and “Privately Printed For Circulation Among Ministers of Religion, 1909.” The work is dedicated to the memory of Marguerite Porrete – a beguine mystic, author of a work dealing with the workings of Divine Love, that was burnt at Paris in 1310. 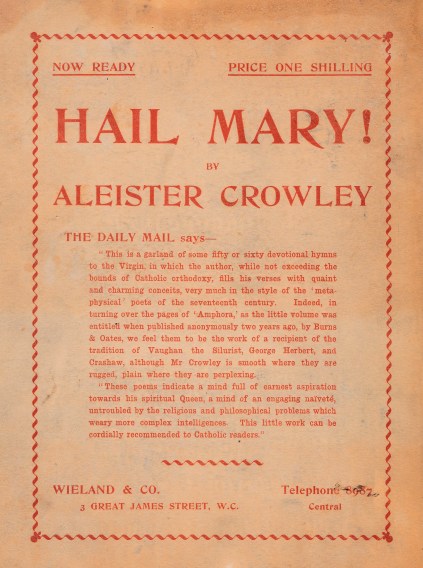 • Advertisement for Hail Mary (Amphora) on the outside of the back cover of the seventh number of The Equinox, March 1912 E.V. However, although here stated as "Now Ready", the book had, in fact, been published by Wieland & Co. in October 1911 E.V. 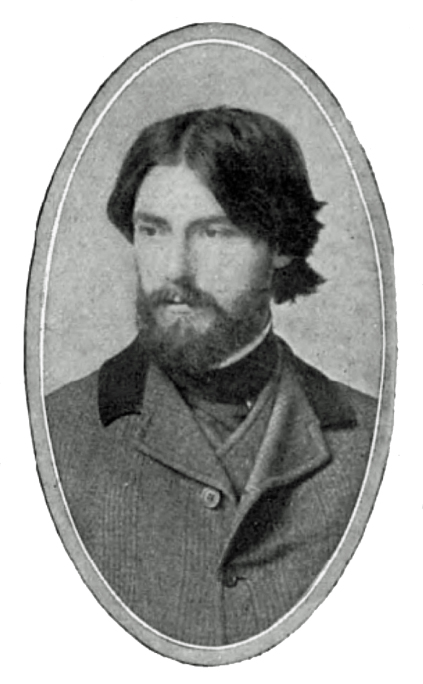 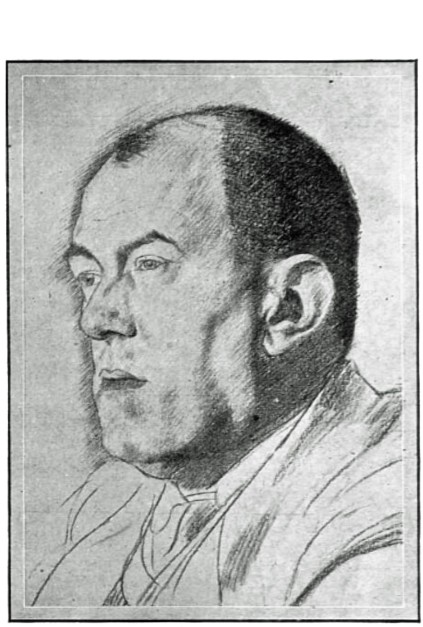 A few months after that the publication of Hail Mary had taken place the Welsh painter and draughtsman Augustus John (1878-1961)(above, left), exhibited in December 1911 E.V. at the Chenil Gallery, Chelsea, London, and among the works was a drawing of Aleister Crowley (above, right). However, it was not mentioned that it was Aleister Crowley, and its title just stated: “THE HEAD OF A POET”. It seems that none of the newspapers and magazines that wrote about the exhibition knew that this poet was “The Beast 666”. The drawing – graphite on off-white wove paper, measuring 44.9 x 27 cm – is today at the Harvard Art Museums/Fogg Museum in Cambridge, Massachusetts. It was bought by Grenville L.(indall) Winthrop (1864-1943), a New York City lawyer and art collector, in 1924 E.V. He bequeathed his entire art collection to the Fogg Art Museum in 1943 E.V. For another of Augustus John's drawings of Aleister Crowley, see the page "Confessions, 1929 E.V."

An overlooked memory of Aleister Crowley.

I once stumbled on an overlooked memory of Aleister Crowley from around 1906-1910 E.V. In the book I Live Again: Travel, Secret Service and Soldiering in India and the Near East, published in 1938 E.V., Royal Air Force Squadron Leader Arthur Rowan (c. 1887-1968), writes:

Of the distinguished visitors who came now and then to speak at society meetings in Cambridge, two particularly impressed me: G. K. Chesterton and Aleister Crowley. As many readers will know, “G.K.” had a habit, while speaking, of taking off his pince-nez and playing with them. On this occasion they snapped in his hand. I was sitting in the front row, also wearing pince-nez, and it looked to me as if mine were of much the same type. I offered them to him, and they proved identical with his. Afterwards he asked me if he might be allowed to return them when he got back to London. I was delighted, of course, but my pleasure waned a little when they turned up in an envelope — broken!

A very different character was Aleister Crowley, of the hypnotic eyes and remarkable learning. At the time of our meeting he was an ardent Rosicrucian and a prolific writer. I regarded Crowley much as did the reviewer of his books, who wrote: “Here is a master voice in song; here is a hand which has ‘waked to ecstasy the living lyre.’ It has indeed been the lot of few men to be the author of thirty-two books and still remain unknown; but it has been the lot of none to sing songs of so divine a melody and so diabolic a discord.”

One day Crowley said to me: “You are interested in mysticism, why don’t you join me? I am shortly going to celebrate the rites of Venus and Mars in a hall in Holborn.” I was tempted, but said no. When we parted he gave me the one hundred and first copy, signed by himself, of his remarkable book Konx om Pax or Essays in Light. I have ever since followed the development of his singular character, and personally I am convinced that some of his poetry will live.

– Rowan recalls Crowley saying that “I am shortly going to celebrate the rites of Venus and Mars in a hall in Holborn.” The Rites of Eleusis were celebrated at Caxton Hall in Westminster in London in October and November of 1910 E.V. – the rites of Mars and Venus both in November – but perhaps Crowley at the time of his meeting with Arthur Rowan thought of a hall in Holborn.

(An extract from For the Thelemites, Chapter 12, but here printed without notes indicating sources etc.)

Just a note to the above statements by Arthur Rowan. During the First World War Rowan was shot down and taken prisoner in Bulgaria! Ask yourself this question: If Aleister Crowley’s work in America during WW1 had made him a traitor do you then think that the British soldier and spy-catcher Arthur Rowan would have written the above about him in 1938 E.V.?! 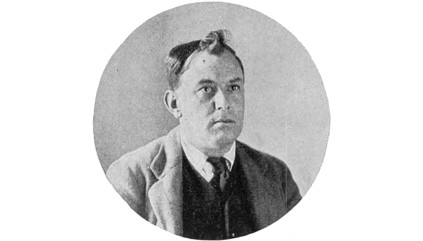 Who was Arthur Rowan who had been tempted to follow Aleister Crowley? He was born around 1887 at the Schlossli (castle), Schloss Binningen near Basel in Switzerland – a castle that his father owned for eleven years. He was the eldest son of Irish railway engineer William Robert Rowan (1841-1900), and Danish-born Gerdine Atalia Rowan, née Jacobsen (1851-1939). In 1898, when Arthur was about eleven, his father was appointed consulting engineer to the French Government and the family moved to France. In 1901, after his father’s death the year before, his mother together with his three brothers and two sisters went to England where he was sent to Bedford public school. In October 1905 E.V. he matriculated at Corpus Christi College, Cambridge, reading Medieval and Modern Languages. Due to his family’s finances Arthur Rowan could not complete the three years at Cambridge and he left – apparently during his third year, 1908 E.V. – without taking a degree. It was apparently after that he had left Cambridge that Crowley mentioned the rites of Venus and Mars to him and gave him the copy of Konx Om Pax.

Rowan did not join Aleister Crowley. On his mother's recommendation he instead went to India becoming a superintendent in a post office. He came back to England in 1915 E.V. to join up and became a Lieutenant in the King's Royal Rifle Corps. He went to Salonika where he became interested in flying and was transferred to the Royal Flying Corps as an observer. Rowan was during the First World War shot down and taken prisoner in Bulgaria. He was reported missing on January 3, 1918 E.V. – 10 months before the war ended. Apart from being a pilot and Lord Trenchard’s A.D.C. – Lord Trenchard (1873-1956), the “Father of the Royal Air Force” – Rowan was also a spy-catcher. In 1923 E.V., as a Flight Lieutenant, he married Violette Colleen Mary MacHutchin (b. 1900), only daughter of Colin MacHutchin, retired Deputy Director Surveys, Madras, of Totland Bay, Isle of Wright. Rowan had a strong interest in Magic and Mysticism and learned Yoga in India. For several years he was stationed in India, and from 1928-32 E.V. in Cairo. In 1935 E.V., as a Squadron Leader, he retired, but was recalled in 1939 E.V. After WW2 he taught languages at The King’s School Chester. The soldier, traveller, and teacher Arthur Rowan, who also was a Fellow of the Royal Geographical Society, died on June 6, 1968 E.V., in Chester, Cheshire, England, aged 80. Arthur Rowan's younger brother was William Rowan FRSC (1891-1957), a Canadian biologist and ornithologist.

(An extract from For the Thelemites, Chapter 12, but here printed without notes indicating sources etc.) 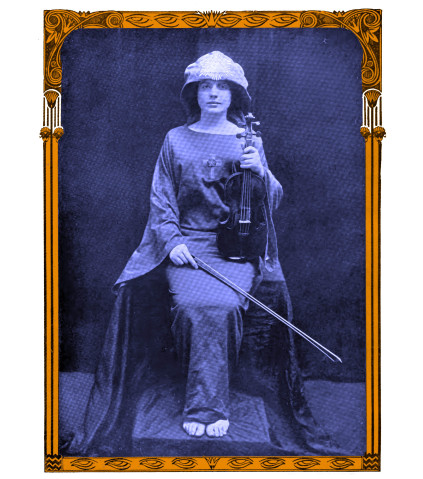 • The Rites of Eleusis, mentioned above, were seven rituals, one for each of the planets in traditional astrology (Saturn; Jupiter; Mars; Sol; Venus; Mercury; and Luna), performed at Caxton Hall, Westminster, London, on Wednesdays from October 19 to November 30, 1910 E.V.: “Miss Leila Waddell and Mr. Aleister Crowley with Distinguished Assistance”. Seen on the picture is “The Goddess”, Australian violinist and A⸫A⸫ Soror Leila (Ida) (Nerissa) (Bathurst) Waddell (1880-1932).